Expert advice: How to help children with grief

"I wish I'd had these tools as a child."

I’m not a doctor or a psychologist but I am someone who know what it is to be a child and to lose the most important person in the world to you.

Having lost my mother when I was two years old, I know first-hand how alone a child can feel in the world when faced with grief.

You don’t talk about the person who has passed because you fear you may further upset the other family members and as a parent, when you both lose a loved one, you might not have the words to give your child what they need to help heal. After all, you are also suffering from the pain of grief.

So, what is left is we just don’t say anything? Absence. It’s like they never existed, and everyone hopes, with time the pain will pass.

Growing up I had so many natural questions not having any memory of my mother: What was she like? How am I like her? But I would just push down and bottle up. Then at 14, after having a breakdown, I ended up in therapy. The first question the therapist asked was, ‘What is your mother like?’ I couldn’t even get the words out that she had died, without breaking down into tears.

After a year of working together and talking about my mother, I reached a place where I could celebrate my mother. What did I learn? The key is talking. Talking about her, talking about how she was, not being afraid to laugh about silly stories, normalising her loss and realising that, even though she may be gone, she was still human, still a part of me. Speaking allowed me to know that it was okay to celebrate my mother’s part in my world.

Children need to know that even though it’s painful to speak about the loss of someone, talking is the only way to face the grief. It doesn’t mean that you won’t have moments of tears and longing for the person who has gone. But by speaking about them it makes a child feel they are near, and the emotion of grief can pass through in that moment much quicker by not being scared to bring up the pain.

Now, 24 years later, every white feather I see, I know it’s my mummy telling me she is always close and I’m doing okay. Having something physical that the child can see which represents their loved one, allows them to still feel they are still near and always with them. It could be a sunset, sunrise, stars, clouds or even a white feather whatever you feel called to choose, but it’s their own object representing who they have lost. 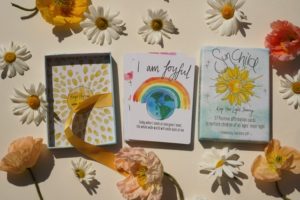 I created SunChild affirmations created to heal from my own trauma as a child and negative belief systems that stem from storing that grief. I wanted to create something that allowed children and parents, to find the words to speak about emotions because there are times in life when you can’t find the right words when faced with grief. The cards are an important tool that I wished I had as a child to help me through that difficult time.

Over 20 years later I have come to terms with my mother’s passing. I feel her every day and know she gave me the greatest gift any mother could give her child, to have strength and love. SunChild is proud to support Feel the Magic, an Australian not-for-profit organisation whose purpose is to create a world where children and teenagers who are experiencing grief from death, are supported to reach their full potential.

From every sale, SunChild donates 5% of profits to the organisation to support grieving children, so that they don’t feel isolated, but rather create an environment where children can be inspired and empowered to succeed despite their loss.

It is so important to encourage children and families to grow, develop and share with others in similar circumstances. Feel the Magic aspires to instil the values of empathy, empowerment, growth and connection in the lives of families affected by grief, and I feel blessed that SunChild has a part to play in helping children struggling with grief, to keep their light shining.

Helping children with grief: Devastated Fifi Box’ heartache for Trixie Belle as they mourn the loss of Jaimi Kenny

5 simple ways to boost your child’s self esteem

20 beautiful Gaelic baby names for your little one PLUS how to pronounce them!

Flu vaccine and children: Is it safe to give kids 2020’s flu shot?

‘My broken vagina’: Zoe George from Big Brother had vaginismus. Here’s what you need to know about it.

Staying calm about coronavirus: 6 ways to cultivate calm in your family

10 child-friendly indoor plants for your home

20 beautiful Gaelic baby names for your little one PLUS how to pronounce them!

Flu vaccine and children: Is it safe to give kids 2020’s flu shot?

‘My broken vagina’: Zoe George from Big Brother had vaginismus. Here’s what you need to know about it.

Staying calm about coronavirus: 6 ways to cultivate calm in your family

10 child-friendly indoor plants for your home